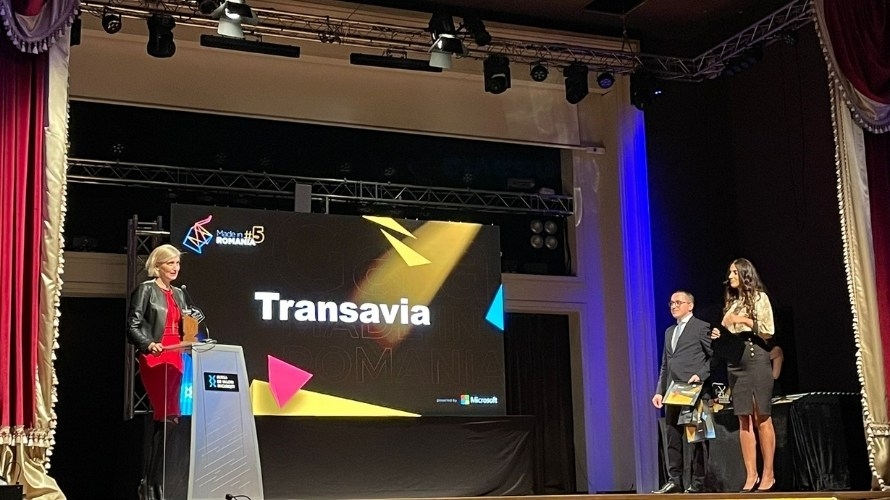 TRANSAVIA, finalist of the BVB Made in Romania #5 project

Alba Iulia, 23 September 2022. TRANSAVIA, the Romanian chicken meat market leader, was awarded as a finalist of the Made in Romania #5 project, run by the Bucharest Stock Exchange. The distinction received at the Awards Gala last evening is yet another recognition of "work done right" by the great TRANSAVIA family, a 100% integrated business, "made in Romania".

This year, the BVB Made in Romania #5 project nominated 350 companies, of which 50 were semi-finalists. The selection of the 15 finalists, including TRANSAVIA, was decided both by public vote and by a jury of 12 specialists in various fields of economy.

"We are glad to be one of the top companies, Made in Romania, which contributes to shaping the Romanian business environment. This distinction is a nice recognition of what our team has been doing exactly right, from the grain to the fork, for over 31 years, but also of building the good reputation of Romanian products abroad, which we have assumed through the high quality of our products that reach almost 20 foreign markets. The Bucharest Stock Exchange's initiative to recognize authentic local brands, successful business models, and ambitious Romanian projects, carried out by large or small local players, is a source of inspiration for Romanian entrepreneurs", says Dr. Eng. Ioan Popa, Founder and President of TRANSAVIA.

Established in 1991, TRANSAVIA is a reputed family business, with 100% Romanian capital, operating sustainably with a vertically integrated business model, based on best practices and the strictest protocols throughout the production and distribution chain, from grain to fork. TRANSAVIA is the only producer in Romania that produces, raises, and processes all its broilers in its own facilities, running 30 poultry farms, including rearing, hatching, and breeding farms, 4 vegetal farms, cultivating 10,000 ha of land, a feed mill, 3 state-of-the-art slaughterhouses, including the largest slaughterhouse in the country that processes 12,000 chickens per hour, a meat processing plant, and over 500 vehicles that ensure the safe transport of raw materials and chicken meat products every day.

Absolute quality, a promise kept every single day in and out, through the application of best practice and the strictest protocols throughout the entire production and distribution chain, from bean to fork, by all 2300+ employees, means the guarantee for consumers that all TRANSAVIA products are of the highest quality and safety, every time.  The quality and food safety management system implemented at all stages of production is FSSC 22000, ISO 22000 certified, and the company's commitment to consumer safety and partner relations is confirmed by the BRCGS Food Safety certification. A sign of recognition and appreciation of the outstanding quality of the products offered is TRANSAVIA's status as the "Supplier to the Royal Household" since 2006. TRANSAVIA is the only poultry meat producer in Romania that has received, since 2018, the GolbaG.A.P. certification, the most important worldwide certification program that certifies the use of good agricultural practices in farms and production facilities.

TRANSAVIA has raised the sustainability bar for the sector in which it operates, being the only company that publishes an annual Sustainability Report since 2019. This year it began the largest investment in green energy in the food sector in Romania, to be implemented in all 56 of its workplaces, providing up to 100% of its own electricity needs, by the end of the project in 2023. Moreover, it is the only Romanian company that has taken on the standards to be a co-signatory of the EU Code of Conduct on Responsible Business and Marketing Practices in the Food Sector.

Made in Romania, is a program run by the Bucharest Stock Exchange, which plans to identify the future drivers of the Romanian economy. This year's anniversary edition, Made in Romania #5, will be complemented in October-November by a series of regional workshops and the launch of Made in Romania, edition V, early next year.